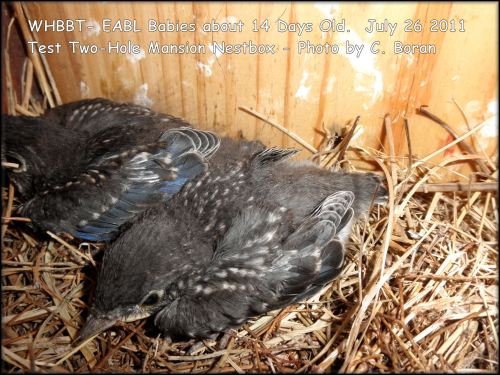 This 3-year test is completed!   SUCCESS!

Here is the plan to build your own 2-Hole Mansion:  http://www.nestboxbuilder.com/pdf/Violett2hm.pdf

Note from me:  Since this test has been SUCCESSFULLY completed and I have been able to fledge bluebirds in a once-occupied House Sparrow nestbox by using this two-hole mansion without the use of gadgets and trapping.   I am using Linda Violett’s words to summarize this test from her website.  Linda is the person who guided me along on the mansion and it is best to use her words, so eloquently done.  Please read on below.  The source of this summary wording for this test on Linda’s page, Violett’s Bluebirds, is here.  You may want to visit her page on my test site to see more details and notes written by Linda:  http://home.earthlink.net/~lviolett/testwoolwine.html

“Christine in  Woolwine, Virginia, agreed to test a 2-holed box at a problem House Sparrow site over a period of three years (2010 to 2012) per the Keys to Success.  It proved successful.he-Year test:

Christine kept online log notes of this test site, as events occurred, on her web page: Woolwine 2-Holed Test.  Her information, photos and log notes are the basis of the test results presented on this test page.

Monitors at test sites cannot trap HOSP, nor install any add-ons (spookers, halo) nor interfere with HOSP/bluebird competition other than to remove HOSP nests/eggs.

Christine’s test box is at an in-town location where there was a history of active House Sparrow/bluebird competition in a 1-holed box prior to the installation of the 2-holed test box.  The rest of her trail is rural with no HOSP problems.

No other box design (to my knowledge) has undergone rigorous tests such as these where the nestbox is placed in areas with intense HOSP/Bluebird competition to document whether bluebirds can successfully defend the test nestbox with no trapping of House Sparrows and no deterrents (Magic Halos and Spookers).

MY NOTES FOR THE PAST THREE YEARS FOLLOW BELOW:

If you have been to this page before and read all the information below, you’ll know that this is a 3-year test starting 2010 for the purpose of seeing if the Eastern Bluebird can win the territorial wars  over the non-native and non-protected House Sparrow by having an escape route (using the second hole) out of the box in case of an attack while inside the box (such as an incubating female), thus giving the bluebird more confidence to defend its territory OUTSIDE OF THE NESTBOX.  I do not need to trap the House Sparrow for this test.  It is same installation as a standard size NABS 4×4″ nestbox–very sturdy–including stovepipe ground predator guard. No Noel guard is needed on this box since it’s a deeper box. Any ground or avian predators cannot reach to a deeper box where eggs or nestlings are located.
I was so excited to post this UPDATE:
July 2012!   WOO-HOO!!!    There have been THREE bluebird clutches fledged in the 2-holer since the last sign of HOSP.  And I didn’t have to do any trapping/killing of HOSP or use add-ons such as HOSP spookers.   This was the only LOCATION on my trail that had a House Sparrow problem in which to place the 2-holed test box.  Bluebirds have successfully fledged chicks in the 2-holer each year of the test without losing eggs, babies or adult bluebirds in any HOSP battle.  This test box is a success!   See logs of activity for 2010-2012.
*  The 2-holed box is larger than standard and has about twice the floor space;

Same installation as standard NABS nestbox–on 1″ conduit with stovepipe predator guard. Generally, these two-holer “mansions” are hanging boxes high in the trees in CA for the Western Bluebird. See Linda’s website on how these boxes are monitored in CA.

Linda has been keeping her page on this test site up to date, as well.
Visit Linda’s site here:  http://home.earthlink.net/~lviolett/testwoolwine.html
Below are current results of this TEST–YEAR THREE–2012, commencing February 2012.  Photo of 5 eggs were taken on April 2, 2012.  See that below! 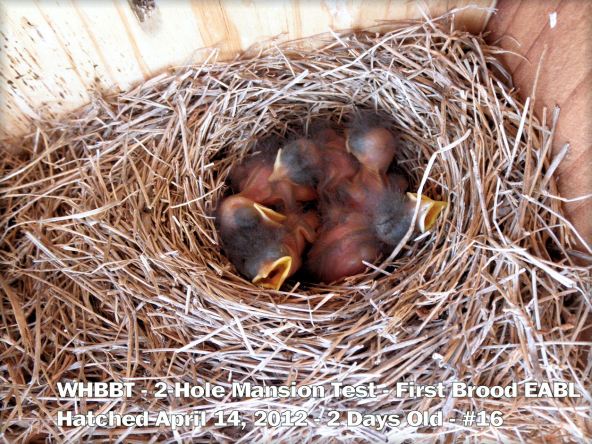 I was on target with estimated hatching date of April 14, 2012. Here are two-day old five bluebird hatchlings on April 16, 2012! Success! The bahies are healthy.  See data on the babies for Test Season Three below. 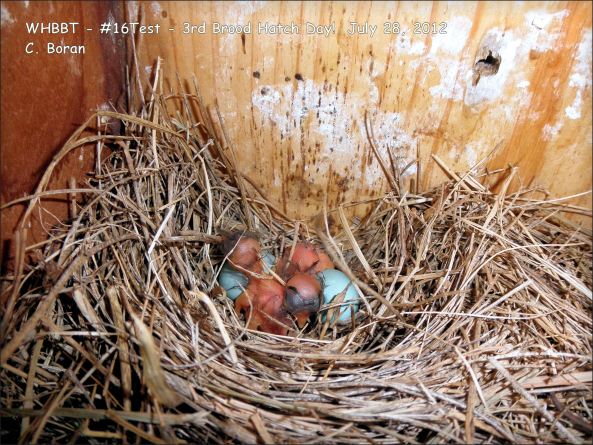 Success once again….third brood of bluebirds hatching. This clutch of 4 eggs has two hatchlings as of 9:30 AM EDT on July 28, 2012. Woo-Hoo For Blue! 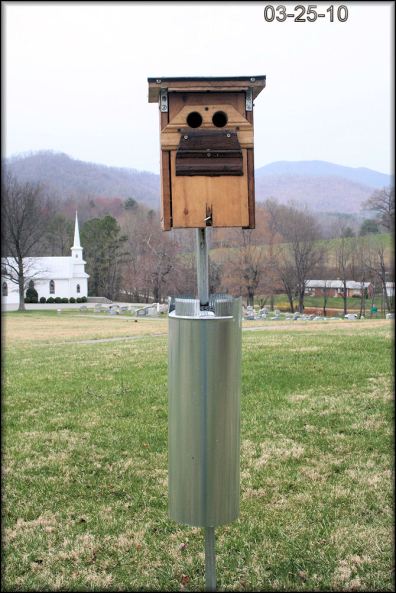 So far, I’m finding House Sparrow nests weekly in this box, as expected, as part of this test. The HOSP nests are removed and no trapping will take place. We will see now if the bluebirds can attain final occupation of nesting in this box by winning the competition for the territory. At least 2 acres of forage space is necessary. Please read this page on the test for more information on this 3-year test between the Eastern Bluebirds and the House Sparrows.

Male HOSP. See how strong his beak is–uses to crack corn and seed and millet and for attacking other birds by pecking them to death. PLEASE DO NOT FEED CHEAP MIXED SEED and use SAFFLOWER OR SUNFLOWER SEEDS to attrack our songbirds. Mixed seed attracks the House Sparrow. I tell anyone who has a bluebird nestbox NOT to attract the House Sparrow by using mixed seed. I use ONLY black oil sunflower seeds in my yard.

Female House Sparrow–the bird people have difficulty identifying. The male HOSP bonds to a nestbox, not a mate. If she fails to reproduce successfully, the male HOSP will find another mate who will! The male bluebird, on the other hand, tends to bond to a mate and not a nestbox. If the female bluebird has trouble with one nestbox, he’ll search out another nesting location for her. WE MUST NOT ALLOW THE NON-NATIVE HOUSE SPARROW TO USE NESTBOXES DESIGNED FOR NATIVE CAVITY NESTERS.

Here is another photo of this “two-hole mansion” nestbox’s installation on back side of pole. See additional notes above.

These guys are persistent. Above is only one-day’s work. I decided to remove it since I was standing there anyway taking this photo. I saw the female fly out of this box when I approached it. 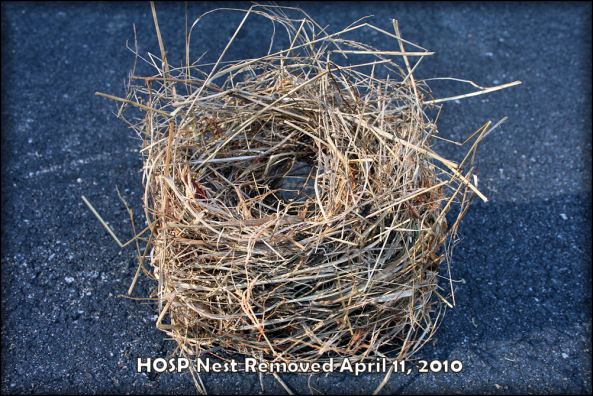 This is the nest positively ID’d on April 11 and removed. You are looking at the front side as it looked when opening the front-opening box. You can see the tunnel has begun, as you see the straw starting to be built up on the back side of the nest. When I approached the box, the female was inside the box for about 20 minutes before I opened it and saw her fly out of it as I approached. Also mixed in the nest and not easily seen here were pieces of fabric, cellophane, and Cardinal feathers. If you look closely on the left side, you can see part of one of the small feathers. 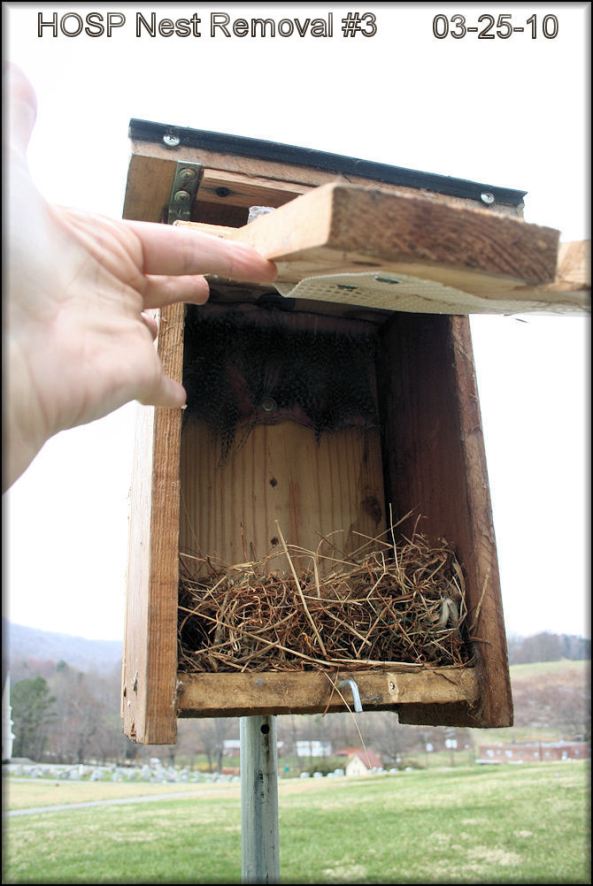 What is this two-hole test all about?  Read on!
This bluebird breeding season commences with installation of a test box (pictures below). I have agreed to test one 2-hole nestbox “mansion” made by Linda Violett in Yorba Linda, CA, for her Western Bluebirds. Maybe the tragedies we hear about our bluebirds getting attacked by the House Sparrow inside a nestbox does not have to happen.  Can the bluebird save himself without too much human intervention by escaping those attacks and keeping dominant over his nest site of choice?  That’s what this test is about. 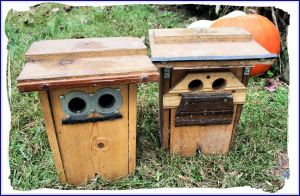 These holes are a “smidge” slightly larger than the standard size entry hole. Starlings and larger birds should not be able to have access.

This is the TEST BOX I will use: Again, standard Eastern Bluebird hole size. 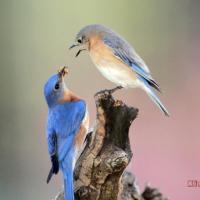 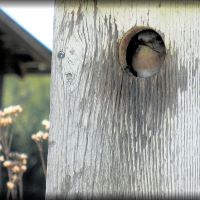